The Makeli Ella Falls is about 10 metres tall and from afar, looks like a sheer white veil spilling off a bride’s headpiece.

Surrounded by granite stones that have been eroded by water over the years, this waterfall flows amidst a scenic part of Kalutara, namely, Thumodara. The water flows down and forms a pool at the bottom, and beyond that, going 6 metres downhill, it meets the Kuda River and mingles with the sea through the Kalu River. 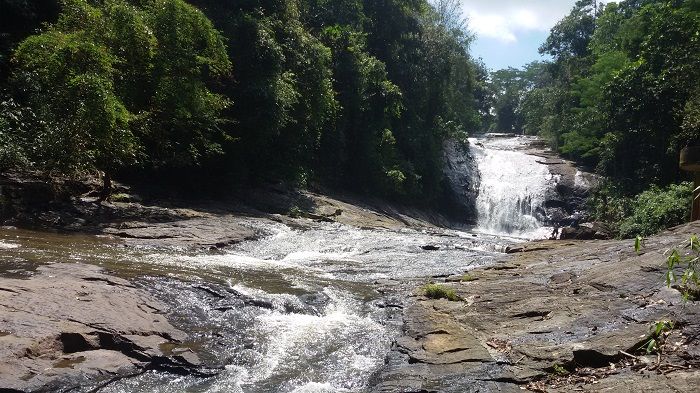 This fall is one of the prominent waterfalls in Kalutara district and can be easily reached from Matugama or Kalutara. Routes are as follows.

The area around the Makeli Ella falls and the falls itself is at risk due to a new project that is underway near Kukule Ganga. The soil that is displaced by the developers could result in collecting up at the stream and silting it up permanently.

Before the project began, this falls was a local favourite for baths, but now, you can find a viewing platform only, and bathing is prohibited in the pool below the falls.

A Word of caution

DO NOT get into the water in the base pool no matter how good a swimmer you are. According to the villages, about 39 lives were lost in this place due to the sheer depth. You can, however, have a safe path upside of the falls. Use the platform built for observations to safely admire the beauty of the fall.

Last but not least: Protect the environment

While you’re here, get to know the other cascading beauties in Kalutara District 💦🍃